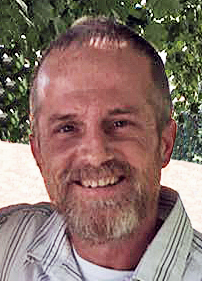 Please share a memory of Chad to include in a keepsake book for family and friends.
View Tribute Book

Chad Edwin Wolthuizen was born January 14, 1967 at Sheldon, Iowa to Edwin Wolthuizen and Donna (Schnider) Snyder. He spent his youth in the Sanborn, Iowa area where he received his education, graduating from Sanborn High School in 1985.

Chad had been employed by Beef Specialists of Iowa in Hartley, IA, Stylecraft in Milford, IA and most recently, with The Merrill Company located in Spencer, IA.

On January 19, 1999, Chad was united in marriage to Shanda Lynn Harders at Primghar, Iowa. The new couple made their home in Sanborn and eventually welcomed two sons, Wayne and Keaton, completing their family. Chad made sure he stayed involved in his boys’ lives as they grew to young men. He was usually cheering the loudest from the bleachers at their school sporting events or cooling off with them at the town swimming pool. He loved to show off his water expertise by doing back flips off the diving board. It wasn’t uncommon to see Chad with one of the boys just driving around town checking out the scenery. He always enjoyed being with his kids; not only was he their dad, he was their best friend as well.

When (if!) Chad got a chance to control the television remote, he usually zeroed in on Barrett Jackson, NASCAR or a Los Angeles Chargers game. Watching with family or friends only made it better.

On Wednesday, July 6, 2022, Chad passed from this life at the age of 55 Years. Preceding him were his father, Edwin Wolthuizen; stepfather, Tom Endorf; grandparents: Frank (Audrey) Schnider, Gertie (Elmer) Walinga, Elizabeth and Ray Endorf, and John and Ruth Wolthuizen.

Share Your Memory of
Chad
Upload Your Memory View All Memories
Be the first to upload a memory!
Share A Memory