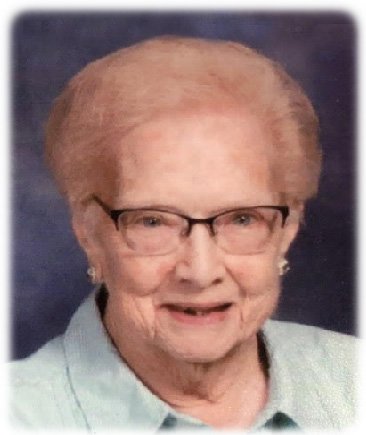 Evelyn Mae Feddersen, daughter of Hans M. and Della (Eaton) Jensen, was born October 10, 1936 at Boscobel, WI. She grew up in the Curlew, IA area, and attended the school there, graduating from Curlew High School. She furthered her education at Emmetsburg Junior College in Emmetsburg, IA for two years, then transferred to Buena Vista College at Storm Lake, IA where she received her teaching degree.

Her first teaching job was at Hartley, IA. While there, she met a young gentleman named Merlyn Feddersen. They were married on August 24, 1958 at the Methodist church in Mallard, IA. To this union were born five children: Delmar, Dawn, David, Denise, and Debra. Evie decided teaching would leave no time for raising a family, so after two years, she gladly began the duties of housewife and mother. In later years, she was employed as a nurse’s aid at the Mann Wing in Hartley, and also as a dietary cook at the Hartley Hospital; both jobs she enjoyed as she was able to be of assistance to someone else.

As her family grew, Evie was there to tend to their needs and be involved in their activities as much as she could. Volunteering to act as the 4-H Leader for the local chapter, as well as one of the Youth Group Leaders at Trinity United Church of Christ in Hartley, gave her an opportunity to serve her community while being with her kids. Evie also participated in the Dorcas Circle at church and was a member of the Yeltrah Club of Hartley. Whenever she found some quiet time, Evie would grab her current embroidery project and spend some relaxing moments creating something beautiful to use in her home or share with her family. She and Mert enjoyed getting together with friends and neighbors at card club and going on “travel adventures” to see the sites or visit their family. While there’s a lot to see in the world, nothing quite compares to the faces of children and grandchildren. Evie and Mert were also proud to host 14 Foreign Exchange students from various countries over the years.

On Tuesday, December 11, 2018, Evie passed from this life at the age of 82 years. Preceding her in death were her parents.

Left to cherish her memory are her husband of 60 years, Merlyn of Norwalk, IA; her children and their families: Delmar and Karen Feddersen of Ashburn, VA, Dawn and Terry Youngbauer of Muscatine, IA, David and Tammie Feddersen of Rochester, MN, Denise and Frank Rohlen of Muscatine, IA, and Debra and Mike Holle of Norwalk, IA; 14 grandchildren; 12 great-grandchildren; half-sisters: Janice Brechler and Jeanne Brechler; half-brothers: Leonard Brechler, Ron Brechler, Dennis Brechler, and Reggie Brechler; other relative and many friends.