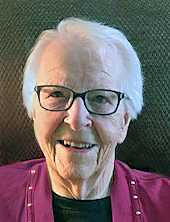 Please share a memory of Dorothy to include in a keepsake book for family and friends.
View Tribute Book

Dorothy Jeanne Hein “Jeanne”, entered the world at her parents’ home near Primghar, IA on December 13, 1923. She was the third of five children born to William and Grace (Bowles) Rohlf, Jr.

She spent her youth around the May City area and received her early education at Excelsior School in nearby Dickinson County. Her parents requested she live with her grandmother in Primghar, IA and attend high school there as they offered a teaching program. In 1941, she graduated from Primghar High School with her diploma and teaching certificate in hand.

Following graduation, Jeanne taught at country schools in Dickinson and Osceola counties until 1943 when World War II became a reality. At that time, she and three other local women moved to Washington, D.C. to aid in the war effort. She began working at the F.B.I. in various capacities including the fingerprint department. When the war ended, she moved back home to Iowa.

On January 19, 1947, Jeanne was united in marriage to Clarence Hein at St. Paul’s Lutheran Church in Hartley, IA. The new couple began their life together on a farm south of Hartley where they would welcome their four children: Craig, Monica, Lisa, and Joel. While there was always plenty of work to do, Clarence and Jeanne never missed a chance to go dancing or get together with friends to play cards. In 1960, the family relocated to their current farmstead southeast of Hartley. Jeanne was excited for the move because she would now have running water and an indoor bathroom!

As with most farmwives, Jeanne’s days were kept full. She took care of her growing family’s needs, maintained the household, and helped Clarence as she could with farm chores. She enjoyed tending her flock of chickens and raised a big vegetable garden every year, freezing or canning what her family didn’t use that summer. She was also a talented seamstress, making beautiful clothes for her daughters and herself.

She had been a longtime member of St. Paul’s Lutheran Church in Hartley, teaching Sunday School when her children were small. She was a member of the Friendly Circle, LWML, and acted as chairman of Human Care for 11 years, sewing quilts for worldwide missions.

Upon the untimely death of her husband, Clarence, Jeanne decided to work at Pete’s Steak House in Hartley (her meringue pies were always a hit). After retiring from Pete’s, she remained on the farm until her 95th birthday when she became a resident at Community Memorial Health Center also located in Hartley. She entered into eternal rest there on Monday, January 9, 2023 with her family by her side; she was 99 years of age.  She now joins her husband, Clarence; her parents; all of her siblings; and an infant grandson.

Share Your Memory of
Dorothy
Upload Your Memory View All Memories
Be the first to upload a memory!
Share A Memory