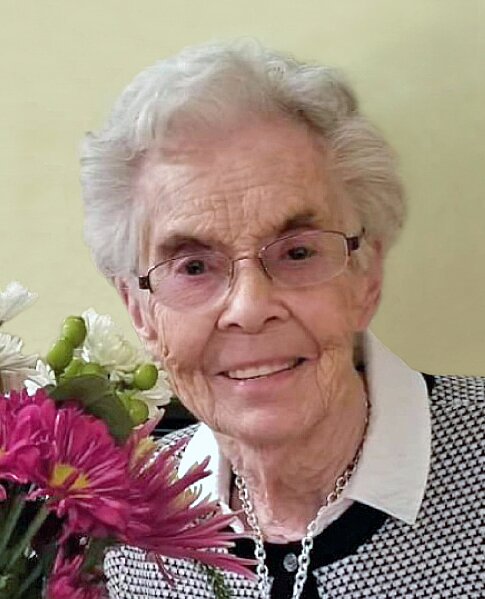 Please share a memory of Colleen to include in a keepsake book for family and friends.
View Tribute Book

Colleen Agnes (Kriens) Hilbert-Hennings, daughter of Raymond and Helen (Epping) Kriens, was born January 21, 1930, in rural Hartley, IA. She spent her youth in the Hartley and Moneta, IA communities, losing her father when he was only 48 years of age. Being the oldest child, Colleen became a huge help to her mother by handling the daily household chores and taking care of her six younger siblings, while her Mother worked outside on the farm.

Colleen received her early education through a rural country school, then graduated from Moneta High School in 1947. While in school, she was involved in Glee Club and choir, band, class plays, and was a class officer. She answered to the nickname “Coke” and was known to have the prettiest hair of all the girls in school!

Following graduation, Colleen continued her education at a business school in Sioux City, IA, and landed her first job at the Spencer Stockyards in Spencer, IA. The years she had spent caring for her brothers and sisters had gifted her with a kind and nurturing demeanor, so her next employment as a nanny for the Bjornstad family of Spencer, was a natural fit. Eventually, Colleen took a job at the chiropractic office of Dr. Paul Sweeney in Hartley; taking care of his young children as well. Somehow, a pan of cookies she was baking for them turned to flames, and help was summoned. The fireman responding to the call would be her future husband, Eddie Hilbert.

The unfortunate cookie fire only served to ignite the relationship, and on November 26, 1955, Colleen became the bride of Arnold Edward Hilbert. Their life together would come to include seven children, and Colleen treasured each one in turn. It wasn’t until the last child was in Kindergarten that she went back to work as a cook at the Hartley school.

Along with caring for her family and following her kids’ and grandkids’ school activities, Colleen managed to take care of a big vegetable garden and beautiful flowerbeds (never a weed in sight). She loved to cook and bake, and always canned the produce she took from the garden in the fall. Going to household auctions was another thing she liked to do, but it usually meant bringing home another refinishing project to complete! Colleen’s social calendar had included the Red Hats, Y’adnom Club and a Ladies 500 card club. She was an active member of St. Joseph’s Catholic Church in Hartley, serving on the Altar Society and teaching Religious Education for many years. Second only to her faith was the love she had for family.

Share Your Memory of
Colleen
Upload Your Memory View All Memories
Be the first to upload a memory!
Share A Memory