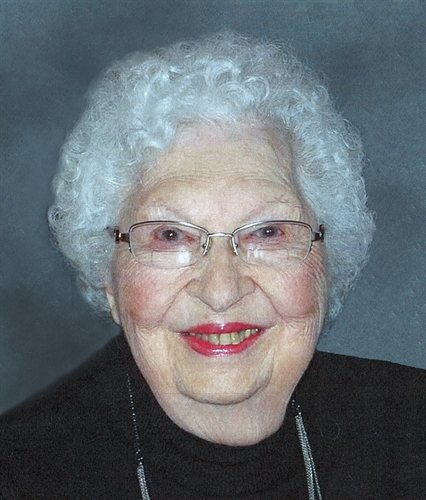 Please share a memory of Doris to include in a keepsake book for family and friends.
View Tribute Book

Doris Ellen Salton Treimer was born to Christian parents, William and Ida Johnson Salton, on May 3, 1926, on a farm in Clay County, Iowa.  She passed away on November 27, 2022, in Hartley, Iowa.  Doris was baptized and confirmed at Zion Lutheran Church in Ruthven, Iowa.

In 1943, Doris graduated from Gillett Grove High School, where she excelled in academics and enjoyed playing the trumpet.  She began working at a young age, first on her family’s farm and then as a bookkeeper at Vic’s Auto Shop in Spencer.  She then went to work at Farmers’ Trust and Savings Bank in Spencer.  When the bank purchased the Gillett Grove Savings Bank, they called on Doris to become the manager.  Being only 19 and alone, she was provided with a handgun for protection.  Doris’ dream was to work at the Federal Reserve Bank in Chicago, but she was sidetracked when she took a temporary job at Treimer’s Insurance Agency in Hartley, where she soon met her future husband.  After a short courtship, she and Virgil Treimer became husband and wife on February 26, 1950.  To this happy couple, five children were born.

Doris was a wonderful homemaker and mother who made every occasion special.  She supported many organizations and stayed active in the community.  She was a member of St. Paul’s Lutheran Church and the Ladies Aid, a Sunday School and Vacation Bible School teacher, a 61-year member of the Friday Club, a member and co-chairman with Virgil on the Hospital Board in Hartley, and a Board Member of the Hartley Medical Center, a census taker for the Hartley School system, a Notary Public, president, vice-president, and secretary of Iowa Mutual Tornado Insurance Women’s Auxiliary in Des Moines, Iowa, as well as involved in other organizations.  She was honored in 2004 when she and Virgil served as King and Queen of the Hartley Quasquicentennial.

Doris was a loving wife, parent, and grandparent.  She was a fantastic cook, and in her mid-nineties, she could still bake delicious rhubarb, gooseberry, and cocoa pies.  She was a poet, an avid reader, and always up to date on current events.  She loved to learn, and banking was in her blood.  She loved her family, and she passed down her values to all.  She had a great sense of humor.  She loved God and her country.  We will never forget her generosity, her beautiful prayers, her great faith, her love for others and her favorite sayings, “don’t we have fun” and “God is good.”

Share Your Memory of
Doris
Upload Your Memory View All Memories
Be the first to upload a memory!
Share A Memory