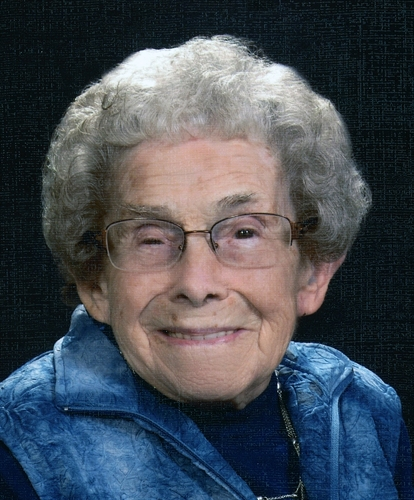 Please share a memory of Hermina to include in a keepsake book for family and friends.
View Tribute Book

Hermina Alice “Mina” (Van Engen) Van Kley was born June 7, 1928, in Archer, IA the daughter of John and Tena (Van Roekel) Van Engen. She attended schools in Sioux Center, IA and Sibley, IA graduating from Sibley High School in 1946.  Mina attended a summer semester at Westmar College in LeMars, IA where she earned a teaching certificate, then taught for one year at a rural school near Sibley.

On March 3, 1948, Hermina was united in marriage to Cornie Van Kley at the Christian Reformed Church in Sibley.  For three years, the couple lived in a small house on Case Van Kley’s farm near Sibley, and then moved to Sanborn, IA in 1953.  Cornie and Mina would live at the same residence in Sanborn the rest of their lives.  Cornie worked for O’Brien County Coop Creamery (AMPI) for 38 years while Mina was a faithful housewife, selling Stanley Home Products and Avon Products while raising their three sons.  Later, she worked at Prairie View Nursing Home in Sanborn and along with Cornie, served for 23 years as custodian of the First Reformed Church in Sanborn where they were both members.

Cornie and Mina’s sons, Craig, Dennis, and Douglas all graduated from Sanborn High School and Northwestern College, in Orange City, IA, becoming teachers and coaches and making their parents proud.  Mina always enjoyed attending her boys’ sporting events, and watching Yankees and Twins baseball games with her husband and sons.  Fishing, camping, and playing card games were also on her list of favorite activities, but probably her best times were those just spent with her family. One of her last days she expressed with joy her love for Jesus, her family, her friends and the Stay in Home workers who helped her this past year because “she wasn’t going to leave her home”.

Cornie entered Heaven on July 17, 2006, and Mina joined her beloved husband and the Lord Jesus on August 15, 2022, having passed into victory at Sanford Sheldon Hospital in Sheldon, IA.

Share Your Memory of
Hermina
Upload Your Memory View All Memories
Be the first to upload a memory!
Share A Memory