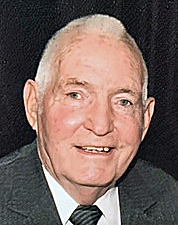 Please share a memory of Fred to include in a keepsake book for family and friends.
View Tribute Book

Fred Gene Tanner, fifth of six children born to Frank E. and Katherine (Wooster) Tanner, entered the world on November 20, 1931, in Eagle Grove, IA. He grew up there along with his brothers and sisters: Margaret, Frank, Jr. “Zip”, James, Dorothy, and Marna. He received his education in Eagle Grove, graduating from Eagle Grove Public High School in 1949. He then joined the Army National Guard, retiring in 1962 after 15 years of service having attained the rank of 2nd Lieutenant.

On July 12, 1953, Fred was united in marriage to Lucile Joanne Johnson at St. John’s Lutheran Church in Craig, IA. They became parents to five children: Mark, Doug, Steve, Scott, and Nancy. Fred’s teaching career would include Iowa schools at Terril, Estherville, and Hartley. From 1961 to 1969, he also officiated local high school football and basketball games, something he always enjoyed doing. After 38 years in education, he retired in 1991.

Having been an avid sportsman his entire life, Fred shared his love of nature with his sons on hunting and fishing excursions. Lots of memories were made over the fire on the many camping trips they took together over the years. Gardening and woodworking were other favorite pastimes for Fred; both proved to be relaxing as well as rewarding. In his retirement years, he also enjoyed traveling and helping others through volunteer work. Of course, nothing brought him more pleasure than just spending time with his beloved grandchildren and great-grandchildren.

Fred was a member of St. Paul’s Lutheran in Hartley where he had served in different capacities of the church. He was also a lifetime member of the National Education Association.

Share Your Memory of
Fred
Upload Your Memory View All Memories
Be the first to upload a memory!
Share A Memory