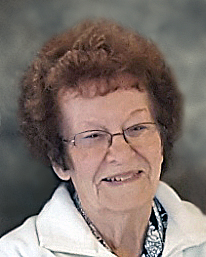 Please share a memory of Marjorie to include in a keepsake book for family and friends.
View Tribute Book

Marjorie June “Marge” Petersen, daughter of Ernest P. and Nellie Ann (Baumeister) Tewes, was born May 14, 1929, at Hartley, Iowa. She spent her early years in the Hartley area along with her fourteen brothers and sisters, and attended the local country school, graduating from the 8th Grade.

On April 23, 1948, Marge became the bride of Eldon Petersen at Worthington, Minnesota. The couple began farming together near Hartley where they would spend their married life together and raise two children: Jimmie Dale, and Susan Kay. Marge not only managed to care for her growing family, but also took on additional jobs in the community throughout her life, finally retiring at the age of 83!

It has been said that work and play can sometimes be the same thing; and so it was for Marge when she was out working in the garden or taking care of her beautiful flower beds. She enjoyed time outside in the fresh air while growing food for her family and adding some color on the farmstead. She also spent many hours at the sewing machine, whether it was creating something new or just doing the weekly mending. Wonderful aromas and lots of good things to eat came from Marge’s kitchen – no one ever turned down a piece of her fabulous homemade pie! She cheered for the Iowa Hawkeyes, loved to get lost in a good book and sometimes tried her luck at a casino - just for the fun of it. Marge had been blessed with various interests and talents, yet times spent with family were the most important in her life.

In the early 1960s, the family left the farm and moved into the town of Hartley. Marge continued baking, sewing, and tending flowers, just in a new location. She was a member of Trinity United Church of Christ in Hartley and participated in their church activities. Marge became a resident of Community Memorial Health Center, also in Hartley, in 2021 and passed away there on Easter Sunday, April 17, 2022 at the age of 92 years.

Those left to cherish her memory are her daughter: Sue Petersen of Hartley, Iowa; one sister, Marlene (Harold) Wills; one brother, Orville (Marlis) Tewes; sisters-in-law: Harriet Tewes, Linda Tewes, and Ruth Tewes; a host of nieces, nephews, other relatives and dear friends.

Share Your Memory of
Marjorie
Upload Your Memory View All Memories
Be the first to upload a memory!
Share A Memory