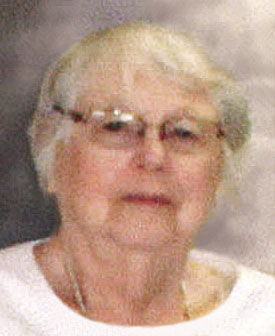 Please share a memory of Shirley to include in a keepsake book for family and friends.
View Tribute Book

Shirley Mae Holz, the daughter of Wayne Franklin and Olga Catherine (Petersen) Fey, was born March 23, 1935, in Correctionville, Iowa. Growing up, she lived in many different places as her father was employed by the United States government installing air strips. Some of the states she resided in were Texas, Georgia, Arkansas, Oklahoma, Kansas, Tennessee and South Dakota before settling in the Correctionville-Sioux City, Iowa area.

While Shirley was in her junior year at East High School in Sioux City, she met the love of her life – Norman Gene Holz - at the Canteen Bar downtown on 4th Street. As the story goes, the rest is history. Norm and Shirley were married May 15, 1953, at St. John’s Lutheran Church in Sanborn, Iowa.

Following their marriage, they lived with Norm’s parents until buying their first home together on Sanborn’s south side. Shirley spent her entire married life in Sanborn, being a devoted caretaker, wife and mother to her husband and their five children. When her son, Randy, graduated from Sanborn Community School in May of 1973, Shirley also received her GED from Northwest Iowa Community College located in Sheldon, Iowa.

In later years, when the kids were on their own, she took a job at Daryle’s Decorating Service right there in Sanborn. She enjoyed helping Daryle around the shop and visiting with customers from the area. She and Norm were both avid travelers – they were able to visit every state in the union, plus Canada, Mexico, Puerto Rico, Panama, and St. Thomas in the Virgin Islands.

Shirley was a loyal, 45-year member of the Mi′Ono Club in Sanborn, and also belonged to St. John’s Lutheran Church, participating in their birthday club for many, many years. She was especially proud of the fact she and Norm can claim 100 children, grandchildren, great-grandchildren, and great-great-grandchildren - and one more baby is expected next month!!

On Tuesday, February 15, 2022, Shirley passed from this life at the age of 86 years. Left to cherish her memory are her husband, Norm of Sanborn; her children: Steve (Sharon) Holz, Randy (Debra) Holz, Gail (Thomas) Gieser, and Lon (Debra) Holz all of Sheldon, Iowa, and Patricia (Richard) Miller of Smithville, MO; 37 grandchildren; 50 great-grandchildren; 2 great-great-grandchildren; many other relatives and friends.

She was preceded in death by her parents, Wayne and Olga Fey; her step-father, Russell Ferry; a sister, Mary Utesch; brother-in-law, Bill Utesch; her mother and father-in-law, Louis and Pearl Holz; Norman’s siblings and spouses; and one nephew, Brad Utesch.

Share Your Memory of
Shirley
Upload Your Memory View All Memories
Be the first to upload a memory!
Share A Memory