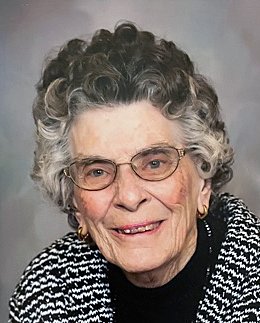 Please share a memory of Helen to include in a keepsake book for family and friends.
View Tribute Book

Helen Arlene Dykstra, daughter of Cornelius “Cornie” and Lizzie (Nieuwendorp) Kleinwolterink was born July 3, 1928 at her parent’s farm south of Sheldon, IA. “Arlene” as she was called, was the second of the four Kleinwolterink children; Joyce being the oldest, followed by younger siblings, Willis and Lorie. Arlene grew up like most farm kids at the time – playing with her brother and sisters or helping her mother with household chores. If she had a choice, however, she’d much rather be outside helping her dad around the farm. She must’ve been pretty good at it too, because quite often she’d be called on to drive the horses bringing hay in from the field.

Arlene attended Carroll #4 country school through 5th grade. When her family moved to a farm west of Sanborn, IA, she resumed her education at Franklin #9 on Highway 18, completing 8th grade there. One of her fondest memories was coming home from school and eating a thick, warm slice of her Mom’s freshly baked bread. Her high school years were spent at Hull Western Christian, graduating with the class of 1946.

After high school, Arlene was employed with the Council Oak grocery store located in Sheldon. At the same time, Hessel Dykstra was working as the cook at his brother, John’s, café. Every now and then, “Hess” would have to come in the back door of Council Oak for supplies…well, the rest is history. Arlene and Hess eloped to Marysville, KS and were married on April 25, 1947.

When Hess finished law school, the new couple settled in Sanborn where they would spend their entire married life and raise their four children. Many weekends were spent camping together at Lake Okoboji – as soon as school let out on Friday, the Dykstra vehicle was packed and ready to go! In later years, Hess and Arlene escaped to Arkansas to avoid the cold Iowa winters, coming home when Spring was around the corner. They had been married 54 years when Hess passed away in May of 2001.

Arlene continued living in Sanborn and looked forward to coffee time with her friends; especially her 10:00 a.m. Monday morning group. Bus trips they all took together were memorable highlights. She also enjoyed knitting, quilting, embroidery or reading a good book. Arlene had been involved in the Women’s Guild at First Reformed Church in Sanborn where she served as organist for many years. Still, her favorite times were those spent with her family; she treasured hugs from her great-grandchildren. Having come to faith in Christ herself at a young age, Arlene’s greatest desire was for her children, grandchildren and great-grandchildren to know that her love for Jesus was real and only by His grace did she have salvation for her soul.

In October of 2015, Arlene became a resident of Prairie View Campus in Sanborn. She was very happy living there; loved the staff and all the activities they offered…especially Bingo.  On August 10, 2021, she passed from this life at the age of 93 years. She was preceded in death by her husband, Hessel; her parents; siblings and their spouses: Joyce (Ray) Vander Broek, Willis (Eleanor) Kleinwolterink, and Lorie (Harry) Dykstra.

Share Your Memory of
Helen
Upload Your Memory View All Memories
Be the first to upload a memory!
Share A Memory