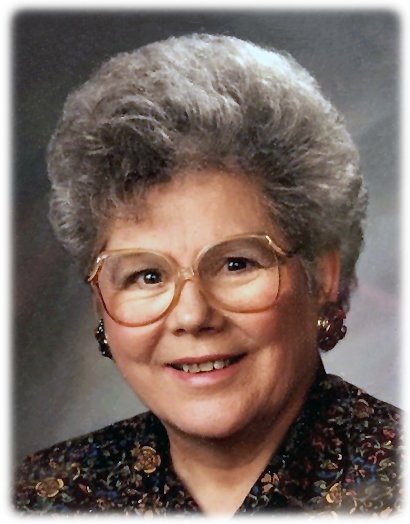 Please share a memory of Marvean to include in a keepsake book for family and friends.
View Tribute Book

Marvean Garlyn Bethke, the daughter of Albert and Gladys (Ostrem) Marco, was born February 28, 1931 in a farmhouse near Sibley, Iowa. She was baptized and confirmed at the American Lutheran Church at Melvin, Iowa.

Her childhood years were spent in the Melvin community where she received her education.

On February 12, 1950 she married Darrell Bethke at the American Lutheran Church at Melvin, Iowa. Throughout their marriage they made their home in the Hartley community where they farmed for 40 years, moving into Hartley in January 1983. Darrell passed away in 1987. Marvean moved to Community Memorial Health Center in November 2012, after hip surgery.

Marvean was a hard worker, helping Darrell on the farm when needed. She also worked at Beef Specialist, Spencer Foods, and Tysons. She was a good cook and a great baker and enjoyed bird watching. She was a member of Trinity United Church of Christ in Hartley. She will be remembered for a big smile and easy laugh.

Preceding her in death were her husband, Darrell; her parents and step-mother, Ann; a sister, Aldine Gorman; and a brother, Dale Marco.

Left to cherish her memory are her two children: a daughter, Garlyn and her husband, Keith Eggland of Pine, Arizona; a son, Darrell Bethke, Jr. and his wife, Cheryl of Hartley, Iowa; five grandchildren: Kari and her husband, Ryan Kieborz of Peoria, Arizona, Stacy Eggland of Phoenix, Arizona, Alex and his wife, Bethany Bethke of Duluth, Minnesota, Mark Bethke of Hartley, Iowa and Melinda Bethke of Humboldt, Iowa; five great-grandchildren: Savanna, Gunner and Wyatt Kieborz of Peoria, Arizona, and Cadence and Blair Bethke of Duluth, Minnesota.

Marvean passed away May 7, 2021 having reached the age of 90. A private family interment will be held at Pleasant View Cemetery in Hartley. There will be no memorial service, per her request. The Hartley Funeral Home is in charge of the arrangements.

Share Your Memory of
Marvean
Upload Your Memory View All Memories
Be the first to upload a memory!
Share A Memory