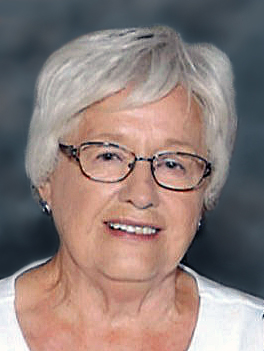 10:00 am - 11:00 am
United Methodist Church
301 North Ocheyedan Street
Everly, Iowa, United States
Family will be present for the visitation.

Get Directions
Saturday
1
May

Get Directions
Saturday
1
May

Please share a memory of Charlotte to include in a keepsake book for family and friends.
View Tribute Book

She received her early education at the local country school before her family relocated to Humboldt, Iowa. In 1947, they moved back to the area, settling north of Everly, Iowa. Charlotte completed her education at Everly, graduating from Everly High School as valedictorian of the class of 1953.

That same year, Charlotte was united in marriage to Harold “Hap” Thorne shortly before he joined the service. Their life together began at Fort Sill, Oklahoma where they lived for one year before Hap was sent to Japan. Following his honorable discharge, Hap and Charlotte returned home and lived on a farm south of Lake Park, Iowa for three years, then moved to a farm south of Moneta, Iowa where they spent their life and raised four children: Susan, Steven Denise, and Michael.

Charlotte enjoyed her life in the country; helping Hap as she could, tending her garden and staying involved in her kid’s activities. She saw to it their home was a warm, safe place to be and there was always something good to eat in the kitchen. Who could resist a warm pan of her cinnamon rolls or homemade buns? The grandkids’ favorite request was her gooey macaroni and cheese followed by a chocolate brownie (or two)! When she could find some quiet time, Charlotte filled it up playing the piano or making quilts. Hours were spent selecting fabric and carefully piecing together “memories in fabric”. However, it could easily be set aside if it meant spending precious time with the grandchildren.

On Sunday, April 25, 2021, Charlotte passed from this life at the age of 86 years. Preceding her in death were her parents, Floyd and Myrtle Fliss; brothers: Virgil (Lois) Fliss and Verlyn Fliss; sisters: Muriel (Gale) Allen and Marjorie (Henry) Mertens; and brother-in-law, Ralph Wichmann.

Share Your Memory of
Charlotte
Upload Your Memory View All Memories
Be the first to upload a memory!
Share A Memory