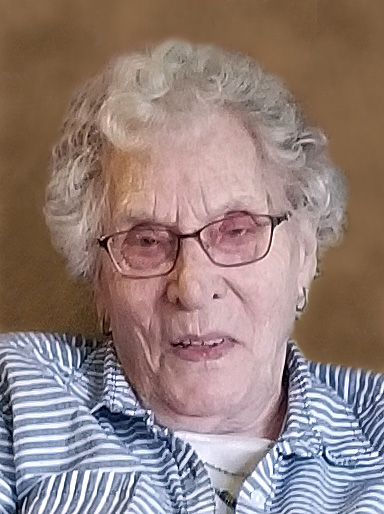 Please share a memory of Audrey to include in a keepsake book for family and friends.
View Tribute Book

Audrey Verla Heldt was born in Terril, Iowa to Rudolph and Dortha (Baker) Heldt on August 26, 1925. She attended school in Terril until the family moved to Spirit Lake, Iowa where she graduated from high school in 1942.

Following graduation, Audrey worked at Osborne Insurance Agency and Gambles in Spirit Lake. On January 13, 1946, she was united in marriage to Wilbur “Bill” Donnenwerth; to this union five children were born. The new couple began their life together on a farm south of Harris, Iowa, living there until 1979 when they moved to Lake Park, Iowa.

Audrey was a member of St. John’s Lutheran Church at May City, Iowa as well as Concordia Lutheran Church in Lake Park. She enjoyed sewing, cooking and baking, or being outdoors tending her garden. Visiting with friends was always a highlight, but she treasured the time she could spend with her family whom she dearly loved. Audrey was an avid Iowa Hawkeye fan and tried to watch as many of their games as she could – or any other sporting event for that matter, live or on television. She and Bill began spending family vacations in Minnesota with all of their children; a tradition that has spanned over 40 years.

She was preceded in death by her parents; her brother, Bud; sisters: Wilda, Helen and Ena; her husband, Bill; son, Paul; daughter-in-law, Sheri; and grandson, Shane.

Share Your Memory of
Audrey
Upload Your Memory View All Memories
Be the first to upload a memory!
Share A Memory