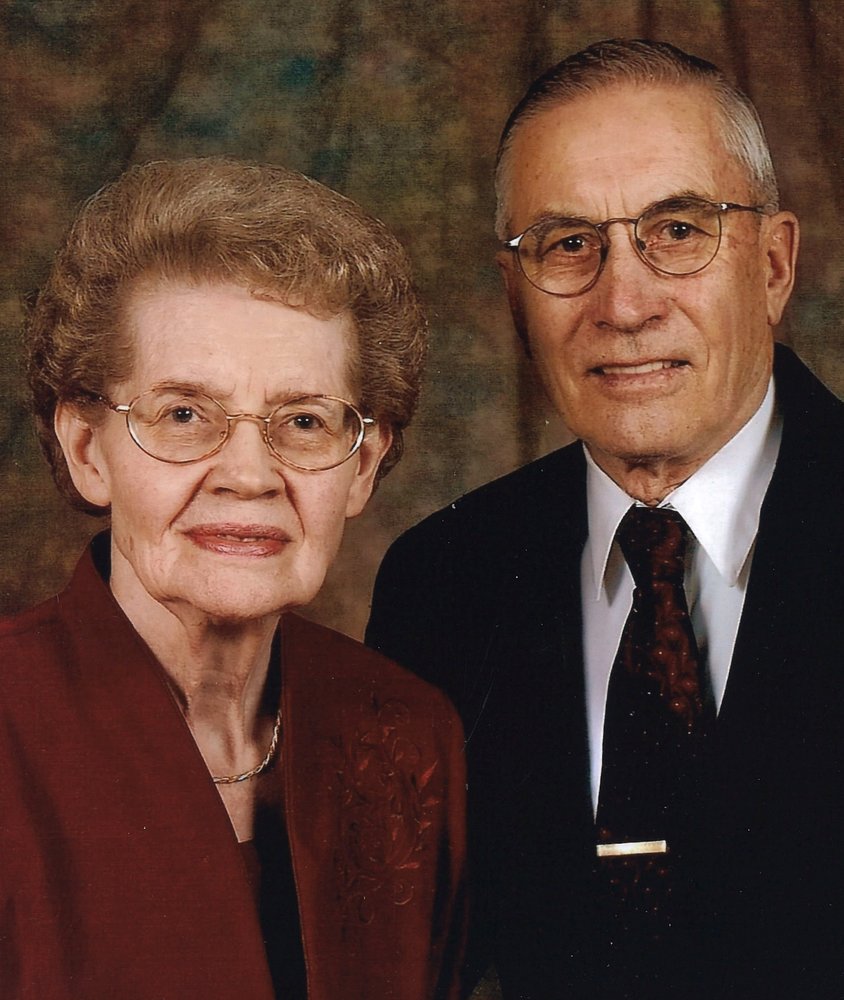 Obituary of Jim and Joanne Hofland

Please share a memory of Jim and Joanne to include in a keepsake book for family and friends.
View Tribute Book

Joanne Kay Hofland, daughter of Bernard and Sadie (Vanden Berg) Steensma, was born at Sanborn, IA on April 23, 1937. She spent her youth in the Sanborn area where she attended Sanborn Christian School. She completed her education in Hull, IA, graduating from Western Christian High School in 1955. She worked as a bookkeeper at Sanborn Coop Grain until her marriage.

On June 11, 1958, Joanne was united in marriage to James G. “Jim” Hofland at the Christian Reformed Church in Sanborn, IA. The couple began their life together on a small acreage near Sanborn where Jim was engaged in farming and Joanne was a homemaker and mother. She made sure her growing family was loved and cared for.

Having four children gave Joanne many opportunities over the years to perfect her baking skills; something she always loved doing. Other things she also enjoyed were flowers, puzzles, shopping, collecting recipes, and attending sporting events. Joanne found satisfaction in pleasing others and providing for their needs. She especially loved selecting gifts for special occasions in the lives of her family and church family. Her greatest enjoyment came from visits and hugs from her grandchildren and great-grandchildren.

Joanne was a member of Cornerstone United Reformed Church in Sanborn. In 2013, she became a resident of Prairie View Nursing Home also in Sanborn, where she passed away on Saturday, October 31, 2020 at the age of 83.

She was preceded in death by her parents; a sister-in-law, Pat Steensma; and brother-in-law, Art Ruiter.

Left to remember Joanne are her sister, Carole Ruiter of Spring Lake, MI; her brothers: John Steensma of Sanborn, IA, and Fred (Marianne) Steensma of Pella, IA; other relatives and friends.

James Gerald “Jim” Hofland, son of John C. and Lena (Kraayenbrink) Hofland, was born on April 10, 1932, in Sanborn, IA. He grew up in the Sanborn area and attended Sanborn Christian School, graduating from the 8th Grade.

From December of 1952 to December 1954, Jim served his country with the United States Army. During his tour of duty, he spent one year in Korea with the 125th Infantry Division.

Jim married Joanne Kay Steensma on June 11, 1958, in Sanborn. For the next seven years, they farmed southwest of Sanborn, then near Hartley, IA, until their retirement.

Jim’s work on the farm included raising crops, cattle, and hogs. His community service consisted of two terms on the Sanborn Christian School Board as well as the Sanborn Coop Grain Jr. Elevator Board. He fulfilled two terms as Deacon and five as Elder at the Christian Reformed Church, and one term as Elder at Cornerstone United Reformed Church where he was a member. He also sat on the original steering committee for Mid-America Reformed Seminary. Jim was always interested in theological matters and found the topic to be captivating reading material. Jim and Joanne also enjoyed vacationing with Jim’s siblings and their families.

In December of 2018, Jim moved to Prairie View Nursing Home in Sanborn where he passed from this life on Saturday, November 7, 2020 at the age of 88 years. He was preceded in death by his mother when he was 9 years old; his father and step-mother; a sister, Verna Zevenbergen; brother-in-law, Dwaine Muilenberg; and sister-in-law, Juleen Hofland.

Keeping their parents’ memory close in heart are the children of Jim and Joanne: Sheryl and Dr. J. Mark Beach of Dyer, IN, Lynda and Kevin Keizer of Hull, IA, Dave and Julie Hofland of Hartley, IA and Kristen and Matthew Fikkert of Matthews, NC; 12 grandchildren; and 17 great-grandchildren.

Share Your Memory of
Jim and Joanne
Upload Your Memory View All Memories
Be the first to upload a memory!
Share A Memory