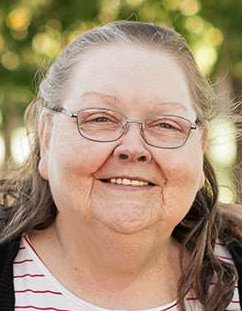 Please share a memory of Patricia to include in a keepsake book for family and friends.
View Tribute Book

Patricia Marie “Patty” Gettier was born on January 23, 1954 in Torrance, California to Leroy and Elfay (Gano) Gettier. She grew up in Torrance and attended West High School.

On November 16, 1974, Patty was united in marriage to Paul Eugene Stringer at Inglewood, California. Following their marriage, they resided in Livingston, California where she was a homemaker. They moved to Melvin, Iowa in 1983, living there one year before returning to Livingston. In 1986, Patty and Paul returned to Melvin where they lived until 1990 when they moved to Sanborn, Iowa. Patty resided at Prairie View in Sanborn before moving to Good Samaritan Society in Le Mars, Iowa on August 27, 2019.

Patty enjoyed reading and playing games on her computer. She loved her family more than anything and especially enjoyed seeing and holding her grandchildren and great-grandchildren. Her family and friends will always remember how Patty preferred to not wear shoes - no matter what time of the year. You would find her either with socks, or without.

On Friday, July 3, 2020, Patty passed away peacefully at Good Samaritan Society in Le Mars. She was preceded in death by her husband, Paul Stringer and her father, Leroy Gettier.

Share Your Memory of
Patricia
Upload Your Memory View All Memories
Be the first to upload a memory!
Share A Memory