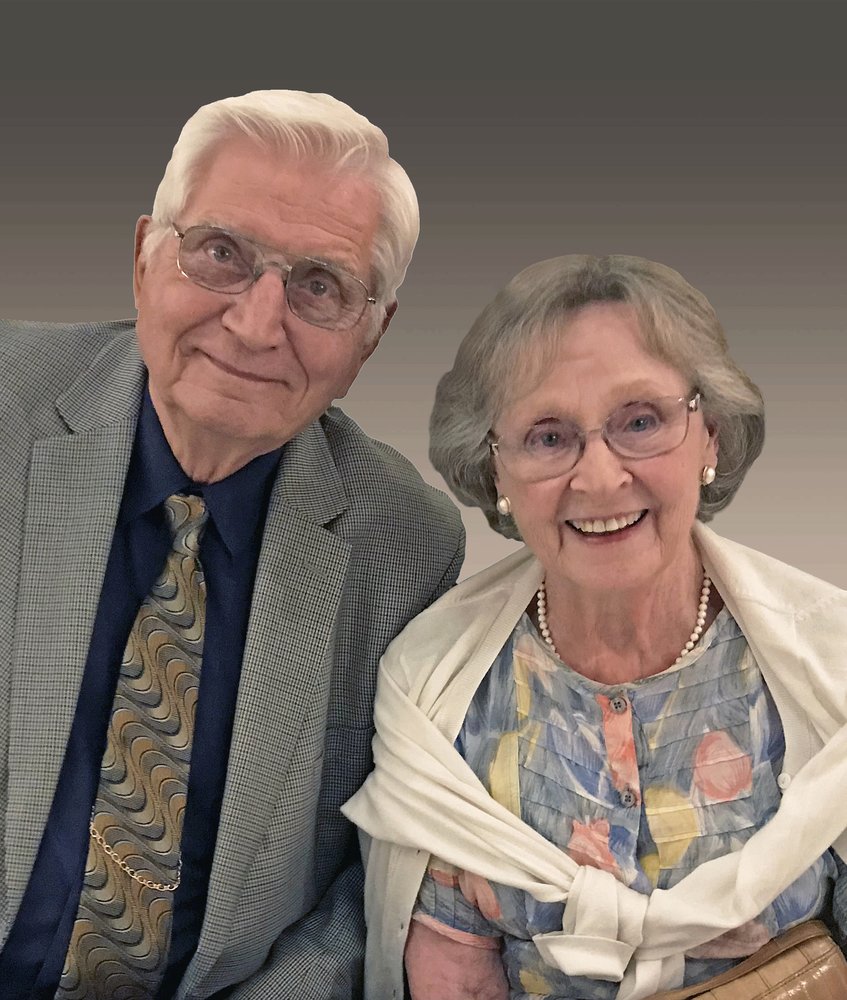 Obituary of Pat and Harvey Juber

Please share a memory of Pat and Harvey to include in a keepsake book for family and friends.
View Tribute Book
Memorial Services for Pat and Harvey Juber of Melvin, Iowa scheduled for March 28, 2020 are postponed. New information will be coming as it is available. Thank You MEMORIAL TRIBUTE HARVEY EARL JUBER, third of four children born to Frank H. and Cora F. (Struyk) Juber, entered this world April 7, 1933 at Melvin, IA. He and siblings, Harold, Leila and Evelyn grew up in the small town where his parents owned and operated Juber Implement, specializing in CASE farm equipment. At young ages, Harold and Harvey became involved “helping out” at the shop, where Harvey's natural mechanical ability soon surfaced. This talent along with a patient, genial disposition would serve him well throughout his lifetime. Trucking and corn shelling were also part of the family business, so eventually Harvey found himself hauling livestock to the Sioux City Stockyards accompanied by his Dalmatian, “Patches” - the first of five spotted companions to occupy the passenger seat of his work trucks. The busy implement schedule was sometimes broken up by short hunting or fishing trips with his father. The young outdoorsman never outgrew his love of nature, so in later years would enjoy many South Dakota fishing excursions with other Melvin anglers. Harvey graduated from Melvin High School in 1952, continued working at Juber Implement and was enjoying the single life...and then he met the love of his life. PATRICIA ANN JUBER, was born on a farm northwest of Gaza, IA on June 16, 1934, the fifth child of Lawrence A. and Laura G. (Lake) Guetschow. She and her five siblings grew up like most farm kids, helping out with chores and entertaining themselves in the grove or haymow. They all attended school in nearby Gaza. In February of 1951, Pat lost her father to a lengthy illness and plans were made to leave the farm. Most of the family moved to Melvin, where Pat’s aunt, Nellie Nuss, was living. Wanting to finish her senior year at Gaza, Pat remained behind and lived with the Conn family, their good friends and neighbors. Following graduation that spring, she joined her family in Melvin, later enrolling at Minnesota State Junior College at Worthington, MN. Her thoughts, however, may not have been on school subjects. Their lives were woven together Meanwhile, much to his mother's delight, Harvey and a couple of buddies signed up for dance lessons at Arthur Murray Studios in Sioux City; something was “in the air”. On June 29, 1952, Pat and Harvey were married at Melvin, where over the years they raised a family of four and participated in various community activities. Harvey managed the corn shelling service operating out of Juber Implement, and gradually assumed more service responsibilities as the business grew. He was a volunteer with the Melvin Fire Department, serving as chief for several years and also filled the office of mayor. Pat became the local Boy Scout Troup leader when her boys were involved and participated in Band Mothers activities at the Melvin school. The Jubers enjoyed occasional weekends away in the family camper where fishing poles were always standard gear. When the children were older, Pat enrolled in the LPN program at Worthington Junior College, completing the course in 1973. Over the next 23 years, places of employment included Prairie View Nursing Home at Sanborn, IA, the Primghar Care Center and Baum Harmon Hospital in Primghar, IA. As members of the Melvin Methodist Church, Pat and Harvey served in many capacities during their life-long affiliation. In their spare time, the couple enjoyed perusing area antique shops for vintage walnut furniture which was lovingly restored for use in their home. After Frank Juber's death in 1978, Harvey, his mother, Cora and brother, Harold continued to operate Juber Implement; Harold and Harvey's sons, Bruce and Todd, joined the firm in 1979. Following Harold's passing in 1991, and after fifty-five years of serving a wide area of Osceola/O'Brien Counties, it was decided to close the business. Harvey, Todd and Bruce began a working relationship with Jaycox Implement at Lake Park, IA and Worthington, MN. Following retirement in 1998, Harvey’s focus shifted to his favorite domain – his woodworking shop. In addition to creating beautiful picture frames, each grandchild was presented with a handmade walnut chest as they were welcomed into the family. Eventually, building and repairing furniture for family and friends expanded into more than a hobby; his skill as a craftsman was appreciated by many and he enjoyed the occasional repair challenges that were presented at his backyard workshop door. The couple both enjoyed entertaining family and friends, especially during the holidays when Pat's homemade caramels, fudge and pecan tassies were in high demand. Spending time in the yard growing plants and flowers was another shared activity; seasonal bouquets and a cup of coffee always welcomed drop-in visitors at the kitchen table. On Thursday, March 5, 2020, Pat and Harvey were reunited with loved ones in Heaven including their parents and grandparents; Harvey's brother, Harold and sisters, Leila (Bernard) Lyman and Evelyn Guetschow; Pat's brother, Lewis (Arlene) Guetschow, half-sister, Joyce (Ivan) Duke, sisters, Phyllis (Dale) Dean, Barbara (Harold) Schmidt and other relatives. Left to cherish their memory are children: Mike Juber of Melvin, IA, Stacey Fortin of Kansas City, MO, Kevin (Linda) Juber of Vernon, CT and Todd (Pam) Juber of Sibley, IA; nine grandchildren: Christina (Kevin) Blankenship, Aimee Fortin, Andrew Fortin, Patrick Juber, Melissa Juber and Christopher (Sara) Juber, Gretchen Juber, Matthew (Josie) Juber and Grant Juber; one great-grandson, Charlie Juber; sister-in-law Joyce Juber; Pat's sister, Marion Dvorak and brother, Jerry Guetschow; other relatives and friends. Memorials given in tribute to Pat and Harvey will be directed to the Melvin Public Library and Melvin Fire Department.

Share Your Memory of
Pat and Harvey
Upload Your Memory View All Memories
Be the first to upload a memory!
Share A Memory