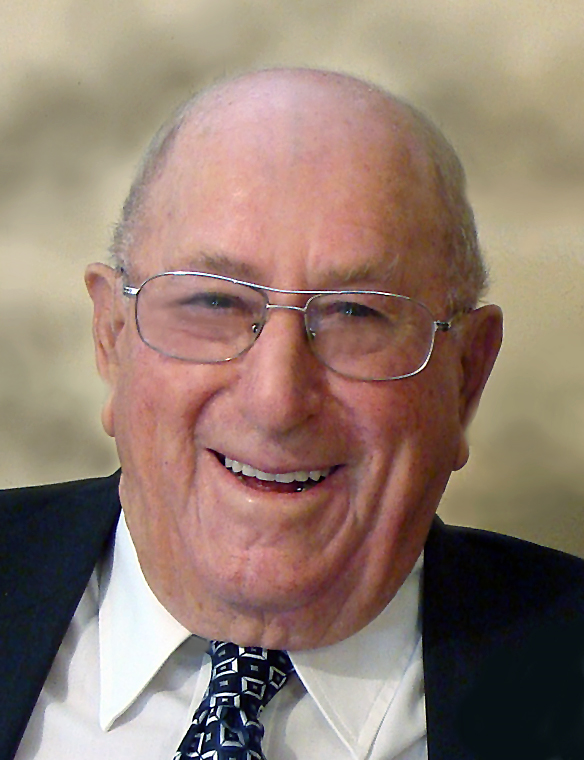 Please share a memory of Robert to include in a keepsake book for family and friends.
View Tribute Book
Robert James “Bob” Benz, son of Fred W. and Hannah B. (Mielke) Benz was born December 12, 1924 on the family farm near Melvin, IA. He and his twin brother, Richard “Dick”, grew up in the Melvin area along with their five other siblings. Bob attended the local country school through the eighth grade and completed his education at Melvin High School, graduating with the class of 1943. One of his favorite “subjects” was baseball…and it showed. Being exceptionally proficient on the pitcher’s mound, he soon earned himself the nickname “Lefty”. Following graduation, Bob joined the United States Navy, serving his country as a gunner’s mate aboard the USS OCTANS in the South Pacific during WWII. He received his honorable discharge in April of 1946 and returned home to farm. On October 12, 1947, Bob was united in marriage to Phyllis J. Knapp at the American Lutheran Church in Melvin. Five children would eventually complete their family: Jeff, Julia, Chuck, Rita, and Terri. Bob, always a farmer at heart, looked forward to the challenges that came with each season. He found satisfaction in the work involved with row crops and managing his cattle operation…all things he enjoyed right up to his retirement in 1993. He and Phyllis remained on the farm until 2000 when they moved into the town of Melvin. Bob was a lifetime member of the American Lutheran Church at Melvin, a 60+-Year member of the Melvin American Legion and had served on the board of directors for Osceola County Cattle Feeders. Having “traded in” his baseball for a golf ball, Bob played league golf for more than 50 years. On Friday, February 21, 2020, Bob passed from this life at the age of 95 years. Those who went before him were his parents, Fred and Hannah Benz, his twin brother, Dick (Yvonne “Gundy”) Benz, brother, Earl (Francis) Benz, half-sisters: Pearl (Harold and Clifford) Brunk and Vivian (Vernon) Brunk; half-brothers: Bernard “Butch” (Theresa) Benz, and Harold (Esther) Jass; many nieces, nephews, and dear friends. Keeping his memory close at heart are his wife of 72 years, Phyllis of Melvin, IA; his children: Jeff (Mary) Benz of Des Moines, IA, Julia (Rex) Michelson, and Chuck (Diane) Benz all of Melvin, IA, Rita (Greg) Hoffman of Spencer, IA, and Terri (Greg) Kimler of Jacksonville, IL; 13 grandchildren; 23 great-grandchildren; other relatives and friends.