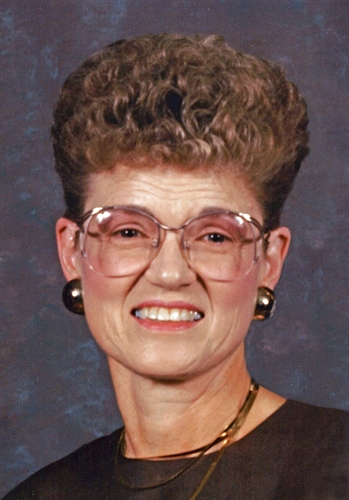 Please share a memory of LaVonne to include in a keepsake book for family and friends.
View Tribute Book

LaVonne Monster, daughter of Bert and Sylvia (Anderson) DeKok was born June 29, 1936 on a farm in northwest Iowa. She received her early education at the local country school, graduating in 1954 from Sheldon High School in Sheldon, IA.

After completing high school, LaVonne attended business school in Sioux City, IA. On June 1, 1956, she was united in marriage to Arie J. Monster. The couple lived in Bremerton, WA where Arie was stationed in the United States Navy. Upon being discharged from the service in 1957, Arie and LaVonne moved back to Iowa and lived in Sheldon before beginning to farm northeast of Melvin, IA in Osceola County. All four of their children were raised there, creating many memorable times together over the years.

LaVonne took great pride in caring for her family and her home. Her home was clean and comfortable, and the freezer was always stocked with homemade cookies. Between the neighborhood birthday group, her family and church activities, LaVonne’s days were filled with much joy. After her children were grown, she worked for Osceola County Home Health, making lasting relationships with many clients.

Holding a special place in her heart was her love for Jesus Christ, her church and the Okoboji Bible Conference. LaVonne’s passion for studying scripture was very evident in the pages of her Bible. Early mornings and late nights were spent at the kitchen table with her prayer list.

Grateful for having shared her life are her children: Jeff (Barb) Monster of May City, IA, son-in-law, Steve Hibma of Hartley, IA, Leisa (Tom) Davis of Sioux Falls, SD, and Machelle (Kent) Applegate of Summerfield, FL; nine grandchildren; eleven great-grandchildren; her sister, Marcia Link of Sioux City, NE; her brother, Frank (Sally) DeKok of Primghar, IA; sisters-in-law: Thelma DeKok of Sheldon, IA and Marjorie Vander Lee of Melvin, IA; along with many other relatives and friends.

She was preceded in death by her parents; her husband, Arie Monster; her daughter, Suzanne Hibma; a brother, Bert DeKok, Jr.; brothers-in-law: John Link and Myron Vander Lee.

~ Memorials may be directed to the Okoboji Bible Conference ~

Share Your Memory of
LaVonne
Upload Your Memory View All Memories
Be the first to upload a memory!
Share A Memory