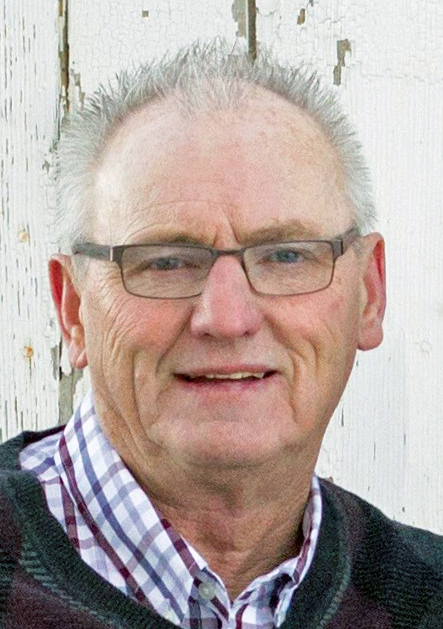 Jerry Leroy Van Beek was born near Sanborn, IA on January 8, 1952 at the home of his parents, Wilbur John and Agnes (Kuik) Van Beek. He grew up in the Sanborn area along with his brothers and sister, and attended the Sanborn Christian School. He graduated in 1970 from Western Christian High School at Hull, IA.

On December 29, 1977, Jerry was united in marriage to Laura Mae Balt at Sanborn, IA. They made their home in Sanborn for a short time, then moved to an acreage west of Melvin, IA. In November 1983, Jerry, Laura and their family settled on the Van Beek home place southwest of Hartley, IA where they would spend their entire married life and raise their three children: Serena, Holly, and Clint.

Having grown up on the farm, agriculture was a natural way of life for Jerry, and he found great satisfaction in all of it – the good years, and the not so good. He also raised hogs and cattle, and drove truck from time to time. While out on a crop check, he often made a stop by the Plessis Elevator to have a cup of coffee with the guys and exchange the latest news. Jerry usually had a joke or two to bring to the table, but also was always there to share the griefs and sorrows of his friends. He loved spending time with his family, especially playing games with his grandchildren. He invested his life into those around him.

Jerry was a member of the Cornerstone United Reformed Church in Sanborn where he served as an elder. He had served on the boards of the Sanborn Christian School and Western Christian High School.

On Tuesday, January 29, 2019, Jerry passed from this life at the age of 67 years. Preceding him in death were his grandparents: Case and Sibea Kuik and John and Jacoba Van Beek; his father, Wilbur Van Beek; brothers: Wayne and Calvin Van Beek; and his in-laws, Richard and Marianne Balt.

Share Your Memory of
Jerry
Upload Your Memory View All Memories
Be the first to upload a memory!
Share A Memory