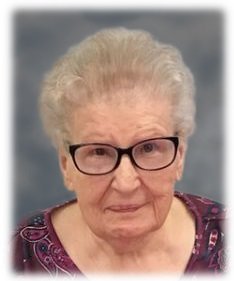 Maxine Alice Petersen, daughter of Charles and Genevieve (Halverson) McClary, was born October 17, 1926 at Sioux City, Iowa. She spent her youth in Sioux City, along with her six brothers and sisters. She received her education in Sioux City schools, graduating in 1943.

On February 12, 1949, Maxine was united in marriage to Rudolph "Rudy" H. Petersen at Morningside Lutheran Church in Sioux City. Five children were born to this union: Linda, Peggy, Janice, Carol, and Steven.

The couple began their life together in the Hartley area where they farmed and raised their family. Over the years, Maxine loved caring for a large garden, spending time with their grandchildren, and traveling with Rudy.

When she and Rudy retired in 1992, they left the farm and moved into the town of Hartley. She participated in functions of St. Paul's Lutheran Church in Hartley. After Rudy's death in 2012, Maxine continued to live in their home, looking forward to visits and phone calls from her kids and grandchildren. She passed from this life on Wednesday, January 16, 2019 at the age of 92 years.

Share Your Memory of
Maxine
Upload Your Memory View All Memories
Be the first to upload a memory!
Share A Memory