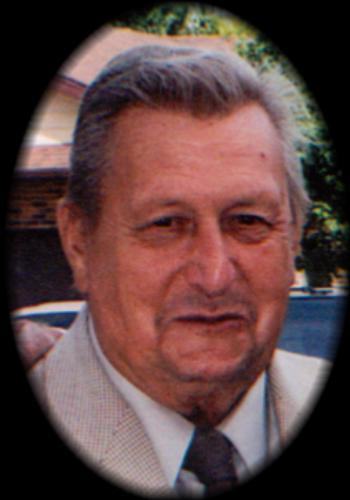 Please share a memory of Raymond to include in a keepsake book for family and friends.
View Tribute Book
Raymond “Ray” John Schuver, the son of Anton and Christina (Nemmers) Schuver was born on May 18, 1926 in Granville, IA. He spent his childhood years in Granville where he attended the St. Joseph Catholic School On April 10, 1948 he was united in marriage to Wanda Mulder at St. Joseph’s Catholic Church in Granville. They were blessed with five children: Steven, Barbara, Patricia, Marie and Susan. Following their marriage the couple moved to a farm northeast of Sanborn where they were engaged in farming. In 1985 they moved to Sanborn, but continued to farm the family home place. Ray passed away at his residence on Sunday, February 4, 2007. Ray was a member of the St. Cecilia’s Catholic Church of Sanborn. He was active in the 10 and 20 stock club. He served on the Elevator Board, F.H.A. Board and the Sheldon Country Club Board for several years. He enjoyed golfing, bowling and baseball. Spending time on his farm and working with his machinery kept him going. Most of all he enjoyed going to Jay’s for coffee where he would laugh joke and visit with his friends. Survivors include his wife of 58 years, Wanda; his children: Steve Schuver and his wife, Tracey, of Everly, IA, Barbara Koon and her husband, Jack, of Chino Valley, AZ, Patricia Cooper and her husband, Tim, of Indianola, IA, Marie Maranell and her husband, Monte, of Carlisle, IA and Susan Jacoby and her husband, Douglas of Houston, TX; seven grandchildren; eight great grandchildren; one brother: Marcel Schuver and his wife, Gwen, of Granville, IA; one brother-in-law: Francis Murphy of Granville, IA. Several nieces, nephews, cousins and many friends. He was preceded in death by his parents, one sister: Marjorie Murphy; two nieces: Beverly Schuver and Ellen Schuver; one great niece: Morgan Schuver; his in-laws Arthur and Lydia Mulder; a brother-in-law and his wife: Darwin and LaVonne Mulder. In Remembrance Raymond John Schuver Born ~ May 18, 1926 Died ~ February 4, 2007 Age ~ 80 years 8 months 16 days Funeral Service 10:30 a.m. Wednesday, February 7, 2007 St. Cecilia’s Catholic Church Sanborn, Iowa Officiating ~ Fr. Tim Hogan Organist ~ Norma Jean Snyder Jones Soloist ~ Barbara Koon Singing ~ “Ave Maria” Offertory ~ “Amazing Grace” “On Eagles Wings” Recessional ~ “Lord You Have Come” Walter Schuver Pallbearers Adam Cooper John Koon Matt Schuver Terry De Graaf Terry Heyn Kelly Ney David Dammon Ushers Phil Snyder Daryl Strenge Interment St. Cecilia’s Catholic Cemetery Sanborn, Iowa The Schuver family invites you to join them for a time of lunch and fellowship in the Fellowship Hall immediately following the Committal service.
Print