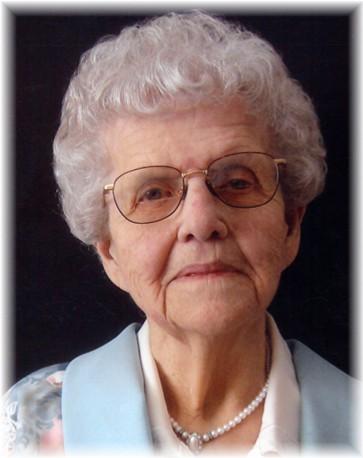 Please share a memory of Mary to include in a keepsake book for family and friends.
View Tribute Book
Mary Johanna (Elgersma) Klaver was born December 20, 1915 in Sanborn, IA; the daughter of Harry and Katherine (Navis) Elgersma. She lived her entire life in the Sanborn area. Mary was united in marriage to Clarence Klaver on January 28, 1940 in Sanborn, IA. Mary and Clarence farmed near Sanborn for many years. Mary was a homemaker for her family. In December of 1968, they moved into Sanborn, where Mary worked for Chuck’s IGA until her retirement. Clarence passed away on August 8, 1998. Later, Mary resided at the Hillcrest Assisted Living in Sheldon for one year. For the past six months, she had been a resident of the Prairie View Retirement Home in Sanborn. It was there that she passed away on July 26, 2008 at the age of 92. Mary was a lifelong member of Sanborn Christian Reformed Church, and enjoyed her years as a member of the Ladies’ Society. She was also an active member of the Sanborn Christian School Auxiliary for many years. She enjoyed gardening, sewing, and playing the piano and organ. She will be especially remembered for the dozens of lap robes she crocheted for missions. Survivors include her three children: Kathleen Zylstra of Ocheyedan, IA, Harv (Verla) Klaver of Parker, CO, and Ken (Trudy) Klaver of Le Mars, IA; her siblings: Elsie Streekstra and Gladys (Cliff) Syens of Randolph, WI, and Gerrit (Olivene) Elgersma of Beaver Dam, WI; three sisters-in-law: Pearl Van Beek of Rock Rapids, IA, Ida Andringa of Sheldon, IA, and Jean Klaver of Sanborn, IA; eight grandchildren; 11 great-grandchildren; many nieces and nephews. She was preceded in death by her parents; her husband, Clarence; a brother, Jacob Elgersma; a son-in-law, Richard Zylstra; and a grandson, James Klaver. A Celebration of Life… Mary Johanna Klaver Born ~ December 20, 1915 Died ~ July 26, 2008 Age ~ 92 years 7 months 6 days Funeral Service Christian Reformed Church Sanborn, Iowa Tuesday, July 29, 2008 at 2:00 p.m. Officiating ~ Rev. Dale Fopma Organist ~ Starla Reitsma Congregational Singing Processional ~ “Savior, Like a Shepherd” #591 “By the Sea of Crystal” #620 “I Know Not Why God’s Wondrous Grace” #495 Recessional ~ “I Will Sing of My Redeemer” #479 Pallbearers Harv Klaver Craig Zylstra Jeff Zylstra Kory Kooima Henry Koldenhoven Raymond Elgersma Honorary Pallbearers Sheryl Zylstra Jeff Klaver Suzanne McCann Leanne Kooima Tricia Klaver Danny Klaver Ushers John Prins Lee Van Tol Bud Krikke Interment Roseland Cemetery Sanborn, Iowa
Print