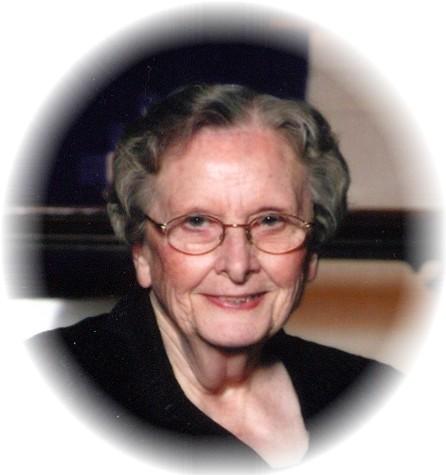 Please share a memory of Marjorie to include in a keepsake book for family and friends.
View Tribute Book
Memorial Tribute Marjorie Lou (Schaffer) Beckman, the daughter of Lewis and Margaret (Dickman) Schaffer, was born on February 9, 1929 in Melvin, Iowa. She spent her childhood years in Melvin, and graduated from Melvin High School. On December 25, 1948, she was united in marriage to Rex B. Beckman at Melvin, Iowa. The couple made their home in Melvin, where Marg worked in local grocery stores for over 25 years. She was a member of the American Lutheran Church in Melvin, and taught Sunday school there for many years. She enjoyed needlework and baking. Over the years, many people in the area were treated to some of Marg’s baked goods. Left to cherish her memory is her husband, Rex; her daughter Sally Watterson of Sioux Falls, SD; two grandchildren, Eric Watterson and Tricia and her husband Justin Miller, all of Sioux Falls; one brother-in-law Alan Beckman and his wife, Billie, of Manning, SC, and one sister-in-law Avis and her husband Richard Dvorak of Melvin; other relatives and friends. She was preceded in death by her parents, two brothers, Herman and Clarence, and one sister, Edna. A Celebration of Life… Marjorie L. Beckman Born ~ February 9, 1929 Died ~ July 20, 2008 Age ~ 79 years 5 months 11 days Memorial Service 1:00 p.m. Wednesday, July 23, 2008 American Lutheran Church Melvin, IA Officiating ~ Rev. Jane Johnston Organist ~ Faye Schall Congregational Hymns Processional ~ “In the Garden” “Jesus Loves Me” Recessional ~ “Children of the Heavenly Father” Usher Becky Hennings Interment Baker Township Cemetery ~ Melvin (At a later date)
Print